Thank vou very much for sending me the announcement
for your exposition. Since I was told that the
exposition of the group of which I was a member was
planned for the 12th of December, I am slightly con-
fused. Have you made cards for that exposition? If
you have any printed announcements or newspaper reviews
of my work, I would appreciate your sending me copies
for my file.

I would also like to announce that I have just been
awarded the Second Prix Pacquement for 1958 selected
at the National Museum of Modern Art. The Museum has
been most flattering about my work and is buying one
of my canvases. I think that this information should
enable you to increase the prices on my work since my
prices in Paris have increased considerably. If you
can double the price which I gave you originally, you
will still be underselling the Paris galleries. I hope
this information has not arrived too late to be of use.

My best wishes to you and your gallery for the holidays. 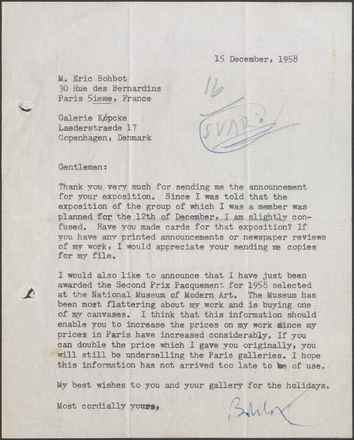